One of the aims (and challenges) of portraiture is to tell a person’s story in just one image. Those that do it well, like Yousef Karsh‘s image of Churchill, are memorable because you see more than a representation of what someone looks like – you see something of who they are.

I was once on a portrait assignment in Old Montreal and asked to capture in a few portraits the main executives of a company with a long and interesting history.

The client, a family operation, has an extensive shipping network and is one of the leading shipping companies in Montreal. The current CEO is following in the footsteps of his father, and his father before him. The corporate portrait needed to capture a sense of the current CEO’s personality and show a continuity and link to the company’s important and valuable heritage. 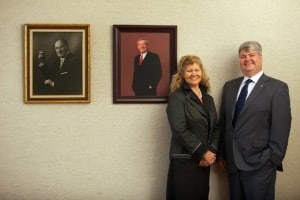 I set up this shot in the board room, using two soft-boxes and positioning the CEO and VP beside earlier portraits of their father and former CEO. My intention was to give the impression of people who are in charge but know their place in history.

I took the next few portraits with the company’s business in mind. I wanted to include a view of the St. Lawrence Seaway visible down below, while highlighting the person in the portrait. Lighting a subject in front of a window is a bit tricky, but  with the help of an assistant holding up a baffle to block unwanted glare, and a willing subject, we were able to capture an image that highlights both the main subject and allows in elements of the background that I felt were important, if subtle, accents to the portrait itself. 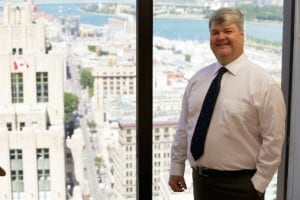 A man with an Empire

Taking good corporate portraits often involves thinking not just about the subject and the technical requirements of the shoot, but also about your client’s business. I believe a good corporate portrait shows a subject in the context of the actual business. While in many cases, a client only needs or wants a straight portrait shot against a seamless grey or white background, in those cases where more can be done, a good way of capturing a corporate portrait is to situate the subject within a framework of visual elements that speak to the culture and brand of the company itself.