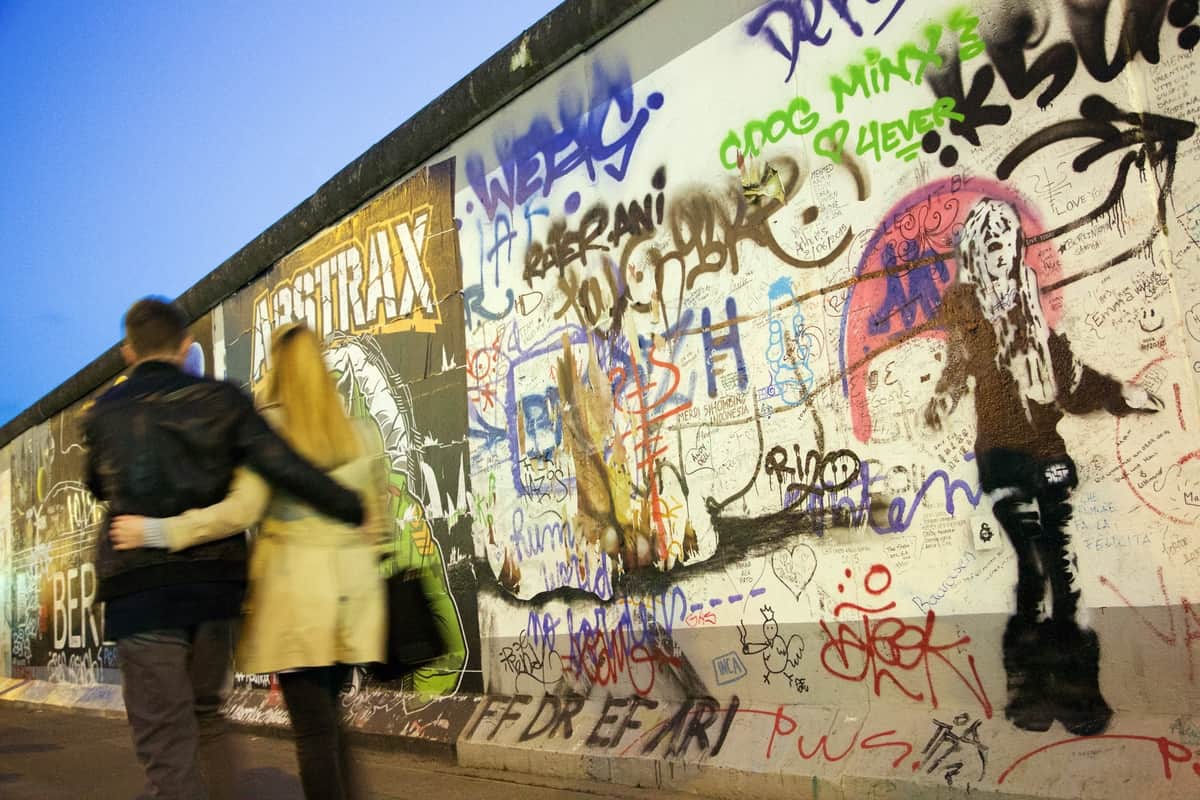 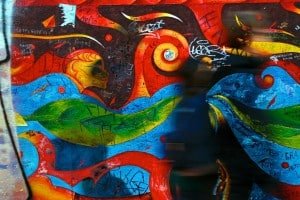 Ghostpeople of Berlin’s East Side Gallery

I read an article this morning by Adam Karnacz in Vantage (on Medium), called Removing People with Long Exposure, in which he described the technique he uses to disappear people from photos at sites where it is impossible to otherwise get a clear shot. Places like St. Peters in Rome, Stonehenge or any major tourist attraction. It’s a simple trick which I also discovered myself recently while visiting Berlin. I was at the East Side Gallery, a 1.7 km long section of the Berlin Wall left standing and completely painted over by artists after the wall came down on November 9, 1989. I had wanted to visit it the first time I was in Berlin two years ago, but ran out of time. Even this visit was rushed, arriving by cab at the end of the day just as the sun was setting. In addition to the dim lighting, there was a metal fence up in front of a large portion of the east-facing wall, erected by the city of Berlin just that day for temporary cleaning of the site. But even at this later time of day there were crowds of people milling by, congregating around the most recognizable sections of the gallery.

I did not have a tripod, as I rarely travel with one since the time I almost missed a flight leaving the Canary Islands because my tripod needed to be checked by security. It is cumbersome to travel with one anyway, but I’ve found a makeshift one can be found by using what you find in your surroundings. A pole to lean the body of the camera on one side works well, or the top of a car or nearby mailbox. A garbage can will work in a pinch, depending on how recently it was emptied out.

I set my camera to shoot high dynamic range (HDR) (which means the camera takes three shots in succession at three different exposures, one under, one correct, and one over-exposure, then merges the three images into one). Shooting HDR requires very static subjects, otherwise the merged images don’t match up and you get strange, electric looking outlines. However, an unexpected advantage I discovered was that if you shoot HDR where something is moving in front of your static subject, i.e., people walking, you get a beautiful shot of your subject and the people either blur right out of the picture or add a surreal, ghostlike effect, showing the traces of humans but nothing recognizable. (See some of my photos of Berlin’s East Side Gallery here)

I thought the effect worked particularly well in some of the shots of got of the East Side Gallery. 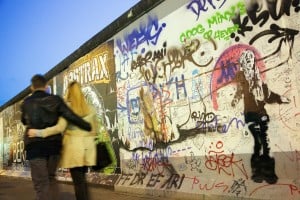 As darkness fell, I switched over to using longer exposures, but this time pointed my lens to take in a bit of the road to capture oncoming traffic to create some random light paintings with headlights next to the wall imagery. I liked the effect in these shots as well. 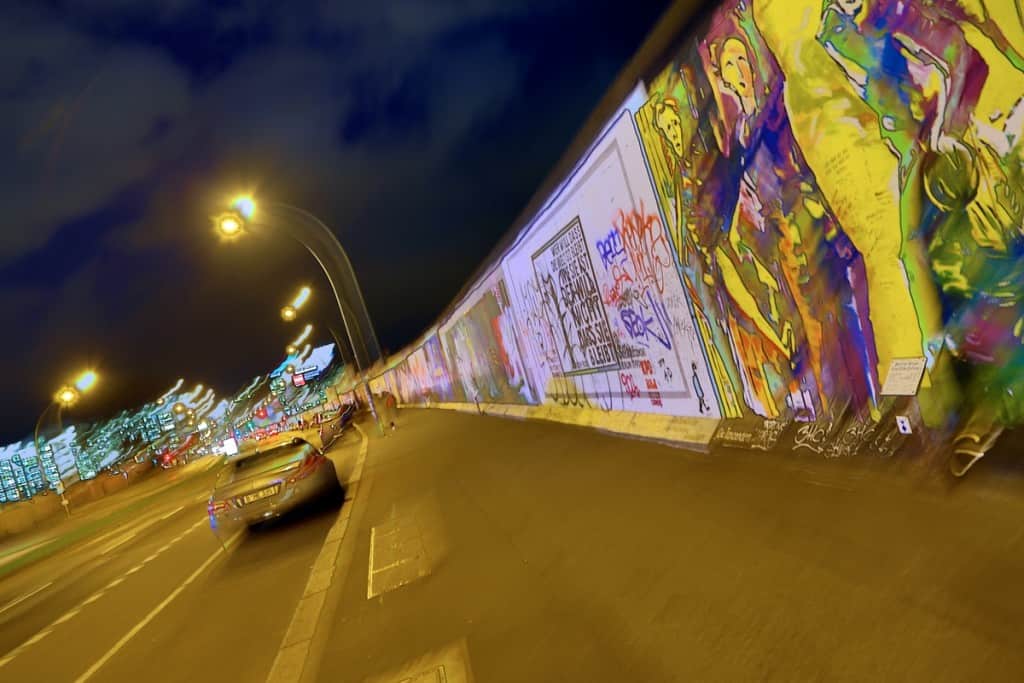 And then there was this final image, which had nothing to do with the wall but was in one of the cars parked right in front of it that I was using as my makeshift tripod. Somehow seems to perfectly capture the quirky, captivating, energy that Berlin emanates and is maybe one of my favourite photos I’ve ever taken. 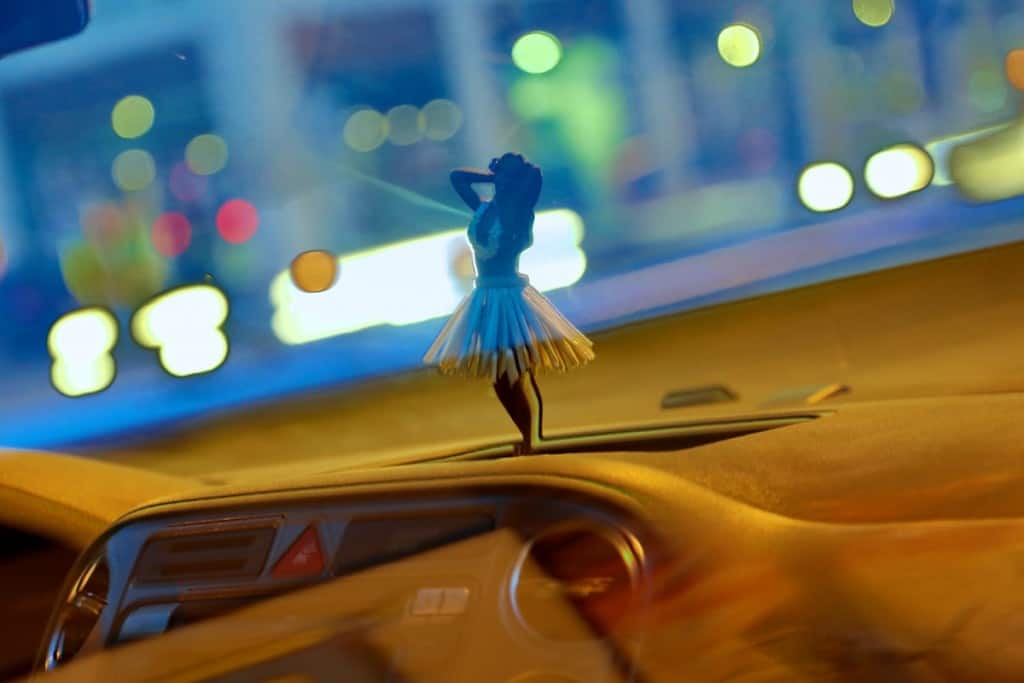