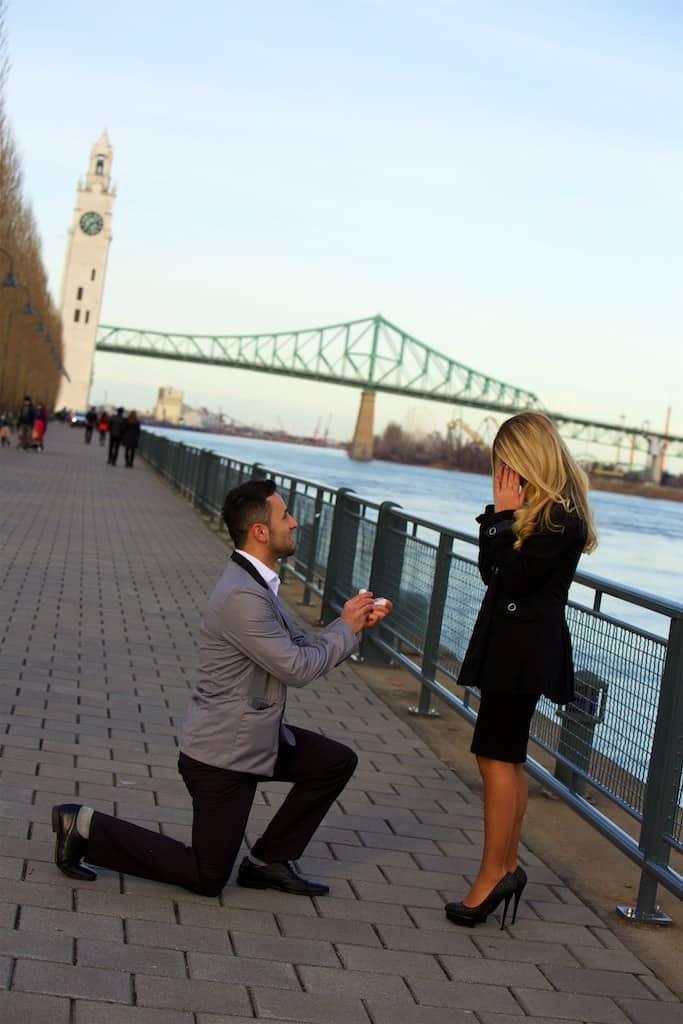 The start of something…

Over the holidays I was hired to be a stalker. I said yes.

Before you jump to conclusions, allow me to explain the context. I was approached by email from a man living outside of Montreal, who was planning to take his girlfriend to Montreal for a romantic weekend, and propose to her. He wanted me to photograph the proposal without being noticed by his girlfriend. I thought it was a fun idea and accepted the challenge. It was a lot of fun and I think will make for a good story the couple (she said yes) can tell at their wedding and hopefully one day to their children.

I often get asked if I cover weddings and work with couples doing things like engagement shoots. Because I am known primarily as an event and conference photographer, and mainly market those services, I understand why people don’t assume I cover weddings as well. There used to be a stigma attached to covering weddings – as if being a wedding photographer was some how a step down in being a professional photographer. I’ve never felt that way and have covered roughly forty weddings in my career, but keeping a wedding photography business and a more corporate and event photography business separate made sense. Of course, by splitting up the two businesses the effort to promote each is duplicated and in the past few years I’ve skewed much more heavily to working with corporate clients and conference organizers at the expense of my wedding photography business. All that to say, I was thrilled to have the chance to work on this stealth assignment because it’s exactly the kind of work I like to do. It’s creative It’s challenging. It’s fun and romantic. And good old-fashioned romance is fun to see and be a part of.

My client had several ideas to begin with and over a few Skype calls and emails we laid out a plan together. Using Google Maps to scout out locations, we chose a route that would lead the couple out of the Hotel Nelligan in Old Montreal where they were staying, through Old Montreal along St.Paul street down to the Old Port. 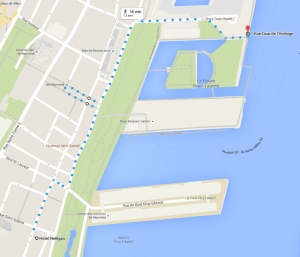 I would be set up in the hotel, start shooting from a distance there and then follow them on their walk down to a designated place at the water’s edge with a view to the clock tower where I was to approach them mid-selfie and offer to take their photo for them, at which point my client would smile and the cat would be out of the bag. With just a few on-the-fly adjustments, it worked out perfectly.

At the Hotel Nelligan, where it began, I realized that there was not one, but three potential lobby areas (one being the restaurant). A special shout out to the Hotel Nelligan staff at Verses who were supremely helpful and on board with the plan once I explained it to them. I asked them to direct the couple to a table by the window while I set up on a table for one, two tables over. Alas, I realized that perhaps the couple wouldn’t come in here at all but might just sit in the lobby which proved to be true after a few frantic texts with my client. Luckily I was able to get out and set up in the lobby in time before their arrival.

Right on schedule, they came down and he made an excuse to return to the room where he had other plans afoot. I grabbed a few shots of his girlfriend, but feeling I was way too exposed, exited the hotel and went across the street into a store from which I could watch the front door without being seen. 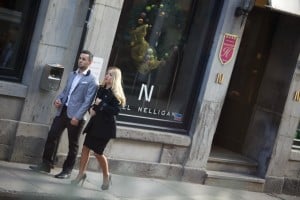 They emerged a few moments later and we began the dance. Every now and then they’d pause for a couple selfie and I’d snap off a few shots pretending to be a tourist taking pictures of buildings. Luckily Old Montreal is full of camera touting tourists, especially around Christmas time, so I didn’t look that out of place. I tried to keep a safe distance, sometimes dogging them from across the street, other times falling in behind them or running ahead to get in front of them on their side of the street, shooting from whatever angle I could find that didn’t make me stand out too obviously.

The plan unfolded perfectly in the crowded streets but as the path they chose led them closer to the water there were fewer and fewer people on the same route till eventually it was really just me and them.  I hung back and pretended to read the signs and stare out at the action in the port while letting them get ahead to the targeted intervention point.

The caper proved successful and post-selfie assistance shot, I revealed myself as planned and we continued walking together, stopping at picturesque spots along the way, as we came across them.  The final leg brought us back to the hotel where we took a few more shots in the lobby, then headed up to their room where my client had strewn the floor and bed with rose petals where we snapped a final shot and I left them.

As I drove home I was inspired by the idea and felt this is something more couples might want to consider. Montreal deserves its reputation as a romantic city, and there are plenty of interesting streets to wander and suitably romantic backdrops to make for some fun photos that will nicely augment your wedding book.

Click here to see a few more photos from the shoot.