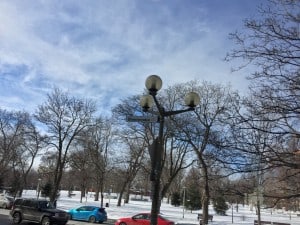 My view this afternoon from Cafe Shaika

It’s cold in Montreal today. -10 Celsius and dropping. While it’s bright and sunny outside, it’s more fun to experience cold winter days like this through a window from a cosy café, which is my plan for this afternoon as I put together my roundup of events I covered so far this year. Luckily there are lots of people still braving the cold and getting out there for worthy events in these winter months, keeping me busy. Here are a few highlights worth sharing from goings on around town in Montreal this past January and February.

Here’s the link to the roundup in pictures. Please read on for details on the various events.

Montreal’s got a talented pool of tech entrepreneurs, developers and product managers who’ve now got another monthly  meetup/chance to drink and network with the monthly events hosted by ProductTank MTL. This month’s meet up which I covered at l’Appartement (one of Montreal’s hip resto/bars in Old Montreal), focused on the Internet of Things (IoT). According to Gartner Inc.: “ The Internet of Things (IoT) is the network of physical objects that contain embedded technology to communicate and sense or interact with their internal states or the external environment.” 128 people had gathered to hear presentations by Jean-François Martin, Director of Products at mnubo; Yahya El Iraki, CEO at mySeat and Mathieu Lachaine, Founder and CEO at Ubios. All three speakers are involved with connected products and had interesting, behind-the-scenes insights and advice for people interested in the exploding Internet of Things (IoT) space. Gartner forecasts that “6.4 billion connected things will be in use worldwide in 2016, up 30 percent from 2015, and will reach 20.8 billion by 2020. Yes, that means that your fridge will be able to order beer for you when you are running out and your toaster will be able to keep track of how much multi-grain toast you’re making.

Interested in learning more and attending the next Meetup? Check out ProductTank MTL here: http://www.meetup.com/ProductTank-Montreal/

Anyone who knows me, knows I love children and that I support child-friendly causes. I’ve been lucky to work with the Montreal Children’s Hospital Foundation (MCHF) for the past two years which puts me right in the heart of a lot of events aimed at raising funds for much needed equipment and programs the Montreal Children’s Hospital uses to save and improve the lives of sick kids. I rarely cover one of these kinds of events without something making me tear up and hide behind my camera, and the kickoff cocktail for the 25th anniversary of Pedal for Kids was no exception.

The Pedal For Kids / Pédalez pour les enfants event is one of the most fun and exciting fundraisers organized by the MCHF. I had covered it earlier this summer but had not had the opportunity to hear Michael Conway, one of the events co-founders, speak until this month. Sylvie Lalumière and Michael Conway launched Pedal for Kids in 1992 in memory of their daughter, Meagan. By the time he was done I was ready to put on my spandex suit and bike until next summer. If you’re curious or would like to get involved with Pedal for Kids check them out here. You can join an existing team, create a new one or go solo. Sign up here: http://pedalez.com/about-the-event/ 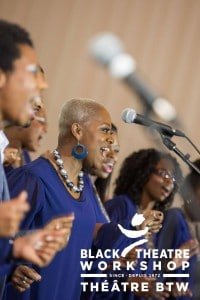 Earlier this year I covered the Black Theatre Workshop’s 30th Annual Vision Fundraiser Gala and also marks the launch of Black History Month in Canada. This is my third year covering this party and I am always blown away by the talent in the room, both onstage and off.  The evening was superbly hosted by Nantali Indongo (of Nomadic Massive fame) with performances by Montreal’s Jireh Gospel Choir,  Kim Richardson and Daniel Loyer, and the coolest (and only) reggae version of Adele’s Hello that I’ve ever heard as part of DJ Don Smooth’s soundtrack for the night.

The guest of honour was Jackie Richardson, aka, Canada’s First Lady of gospel, jazz and blues who received the Martin Luther King Jr. Achievement Award. Also on the roster were: Otis Grant, world championship boxer who received the Dr. Clarence Bayne Community Service Award; Briauna James who received the Victor Phillips Award, and Vladimir Alexis who received the Gloria Mitchell-Aleong Award. Artistic Director, Quincy Armorer couldn’t be physically present as he was performing in Twelfth Night in Ottawa’s National Arts Centre, but he made an appearance via Facetime.

Though sadly I missed the Beaver Hall Group show at the Montreal Museum of Fine Arts, I was lucky to catch a sneak peek at the curation of the event at a arts event held at the University Club of Montreal. I love the old world charm of the club, and events like these are a reminder of Montreal’s historic and ongoing role as a city of the arts.