My drone dumped me I lost my drone this weekend.

I should have known something was off when my puppy ran off into the dark the night before. A foreshadowing I ignored to my despair the next morning. I was lucky with the puppy. He must have sensed the desperation in my voice when I pleaded with him to come, after chasing him out the door with nothing but my underwear on waving my phone around in the air frantically trying to lure him back to me. He disappeared into the woods, popped back out again down the road, then to my horror slipped through the gate leading out to the darkened country road down which, if he had continued, he would surely have gotten lost, eaten by a bear or hit by a car. He turned and trotted over to me, and I managed to grab him by the collar and lead him back to safety.

Unfortunately, my Mavic Pro drone with whom I’ve shared so many adventures, was not so caring. It just decided, all of a sudden, it was over and left.

It happened so suddenly, I’m still in shock. One minute it was rising up over the Porsche I was photographing, trying to capture that beautiful machine in an as beautiful landscape, the next it slowly began drifting off centre. 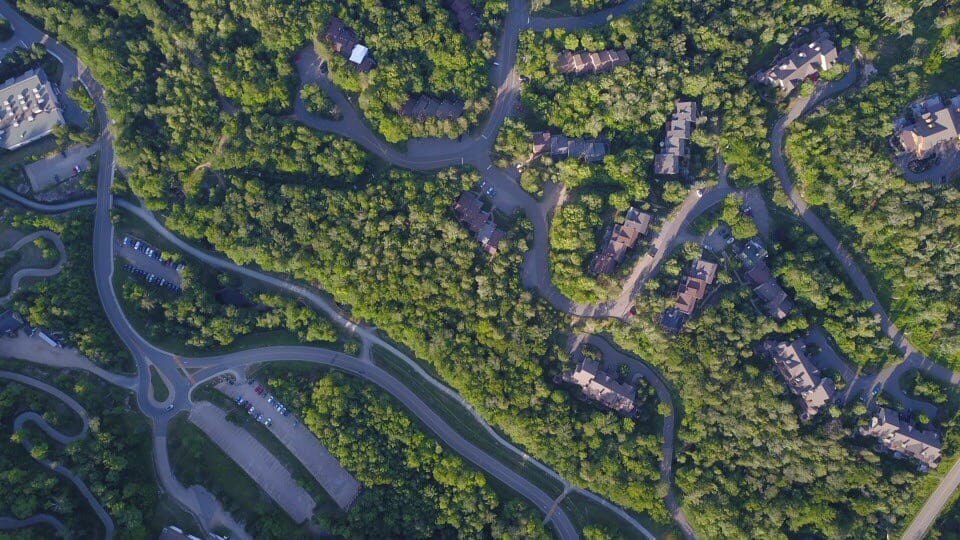 There were warning signs, (aren’t there always?) but I ignored them, as I had so many times before with no consequence. Alas, not this time. Those strong winds really were strong winds. I just I didn’t feel them from where I stood, alone, in that empty parking lot.

When I realized I was losing it, I began trying to nudge it back home. I didn’t panic immediately, but as I watched the distance grow between us, my attempts to bring it back grew more frantic. I began jamming that little joystick as hard as I could to the return position, but it only seemed to drive it further and further away.

That’s when the low battery warning went off. 30%….29%…..Then I really did panic. I tried the Return to Home button which has saved me more than once, but my max height was foolishly left too low and I was high up on a mountain. There were too many obstacles in the way. Try as I might, it just wasn’t turning around.

The owner of the Porsche realized I was in distress and suggested we pull up the map and drive to where the drone was heading. Although I knew in my heart it was already too late (battery at 10% and falling) I was desperate and willing to cling to any shred of hope.

We hopped in and the Porsche sprung into action. But the drone was still flying straight out and away….it was over the lake now. Battery dangerously low. 7%…5%…alarm bells ringing, the Porsche racing, the wind buffeting my ears as I hung out the window desperately trying to get a signal.

Then it happened. Aircraft disconnected. The screen went black. It was over. And there I was, in the middle of my life, suddenly droneless.

I put on a brave face for my companion. I pretended to laugh it off. “It was bound to happen,” I said. Things had been a little rocky between us and we’d just narrowly avoided this very thing happening a week earlier in the Saguenay.

But I knew it wasn’t true. Inside I was still standing there at the top of the mountain, screaming into the invisible winds that had just torn my lovely little drone out of my hands and flung it into the cold, dark lake. We’d been together for just under two years. Not long, but long enough for the love to grow, while still feeling new and exciting. I took it with me whenever and wherever I travelled – racing over beaches in the Dominican Republic, swirling around the terra cotta roofs and quaint plazas in Lisbon, or simply sailing through the sky around Gatineau at fall shooting the vast and beautiful landscape as it blazes with autumn leaves.

I used to feel a trembly thrill just taking it out of its snug little carrying case and gingerly unfolding its wings. I’d removed the plastic cover that protected its delicate little gimble, set it down carefully on the ground and turn it on. As it whirred into life, I’d feel a surge in my heart.

We didn’t always get along. Just last weekend we had a falling out of sorts as it passed through the magnetic field over an aluminum smelter and skidded out of control until finally we patched things up and it came back for a safe landing. Maybe it was a sign. Maybe I should have been more sensitive. Paid more attention to those screen warnings to calibrate and update the database. Was I too selfish?

All I wanted was for us to be together, flying through the sky, taking in wide, stunning views of the land below. I never meant for it to get hurt. I thought I was doing the right thing, showing it the world, providing it with ample battery power. I even bought it a high speed 32gb micro card so that we could record more of our times together without having to face that dreaded “SD Card Full” warning (like that time in Lunenberg when it was all the way out over the bay ready for a well planned flight home. Sigh.)

It’s still hard to believe. Just a few short weeks ago we were so happy together, chasing after kayakers at Trout Point Lodge. On one sunset flight, mosquitoes swarming around my head, it came down and hovered there just out of reach, blowing all the annoying little bugs away to keep me safe. What we had was real.

But now, nothing. Just a remote controller with nothing to connect with. I still have the batteries. I’ve left them fully charged, in the vain, impossible hope that somehow, someway, it will come back to me.

I don’t have the heart to tell them it’s over just yet.