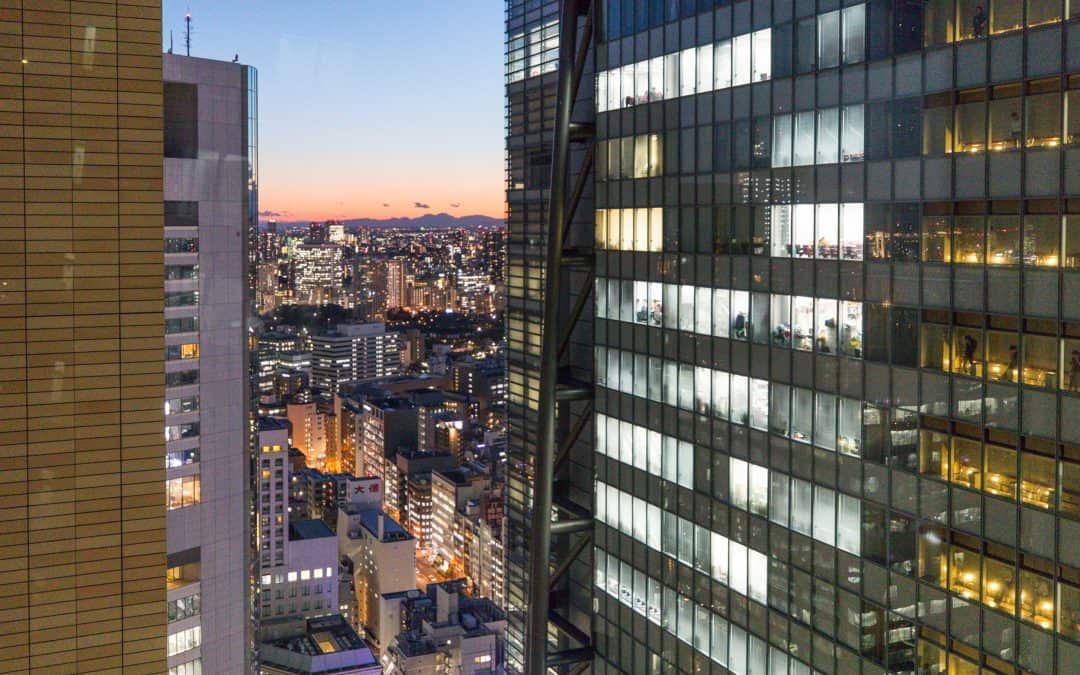 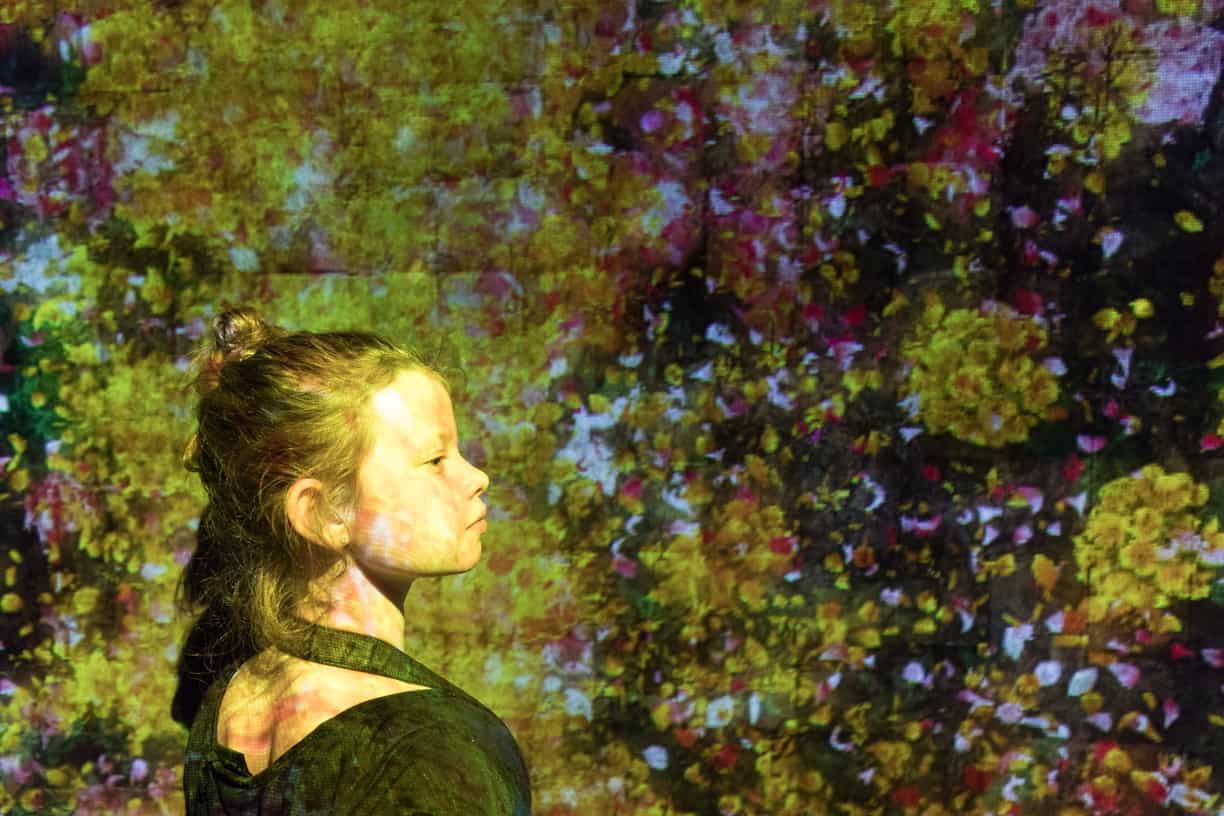 Japan is a gift to photographers and should be at the top of the list for any traveller who enjoys travel photography and experiencing a unique culture.  It is a land that is safe to travel through with expensive gear, offers an abundance of areas to visit and a wide range of photographic genres to immerse yourself in – including landscape photography, street photography, portraiture, nature photography, food and travel photography.

I am recently back from two weeks travelling through Japan, and while my trip (and this guide) is necessarily limited by the choices made on the trip, it does follow a fairly well-established itinerary for first-time visitors to Japan and certainly encompasses some of the main attractions and areas any traveller to Japan will seek out.

This being my first visit to Japan, I wanted to experience as much as possible without overreaching. The route I settled (shown below), began and ended in Tokyo. We got full use of our Japan Rail passes, riding the Shinkansen (high speed train) between cities and taking the subway everywhere we wanted to get to in Tokyo, Kyoto and Osaka.

Here’s where we went:

Japan offers such an array of things to do and see and is, for many North American travellers, a distant and expensive destination, so it is recommended you do a little more advance planning than you might otherwise for a self-led trip. 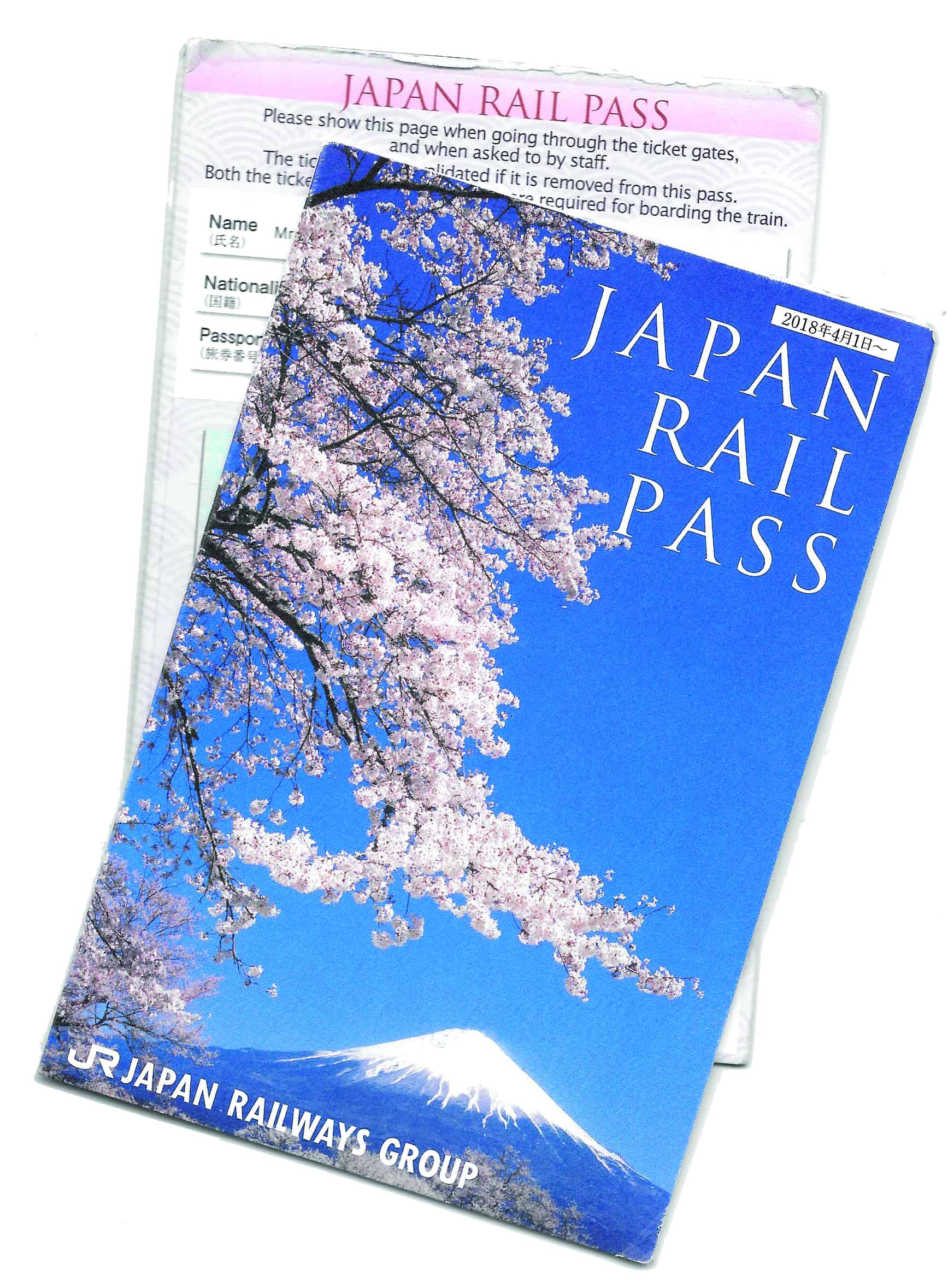 Purchasing a Japan Rail Pass (regular class is fine as the trains are immaculate and comfortable), in advance of your trip is a must if you intend on travelling anywhere other than the city of your arrival. Japan Railways comprises six regional JR companies  effectively covering the entire country. In addition to inter-city travel, every city the railways reach also has at least one of not more JR lines within that city’s metro system. Just show your pass to the gate attendants and you don’t need to purchase a ticket for that ride (though if your subway trip requires a transfer to another line you will need to pay for that portion of the subway trip).

Renting a pocket wifi device is essential. While many Airbnb hosts will leave one for you to use, it won’t help you when you travel between cities and you will want access all the time. Despite often feeling like you’ve leapt into the future as you travel through Japan, free wifi isn’t as widespread as you would expect. I rented ours from eConnect Japan, picked it up at the airport where I dropped it off on my return and it worked perfectly throughout our trip.

Other things to look out for are access to popular sights and destinations, such as the Ghibli Museum in Tokyo (which needs to be done three months in advance) or the teamLab Borderless experience (both described further on) .

Our journey began (and ended) in Tokyo, arriving at Narita airport and taking a rapid express train in to town for our first encounter with Tokyo’s very busy metro system having to transit through one of the world’s busiest station: Shinjuku. While the sheer masses of human traffic and plethora of lines to choose from can be daunting, especially to weary travellers having just flown half-way across the world, we were successfully guided through the madness by a kind stranger whom we met on the express ride into town (an occurrence, we were to discover, was the rule rather than the exception: while it is easy to imaging being lost in Japan, it is actually very hard to do as almost every time you find yourselves confused, a very polite and friendly local will sort out what you are looking for and make sure you get there). 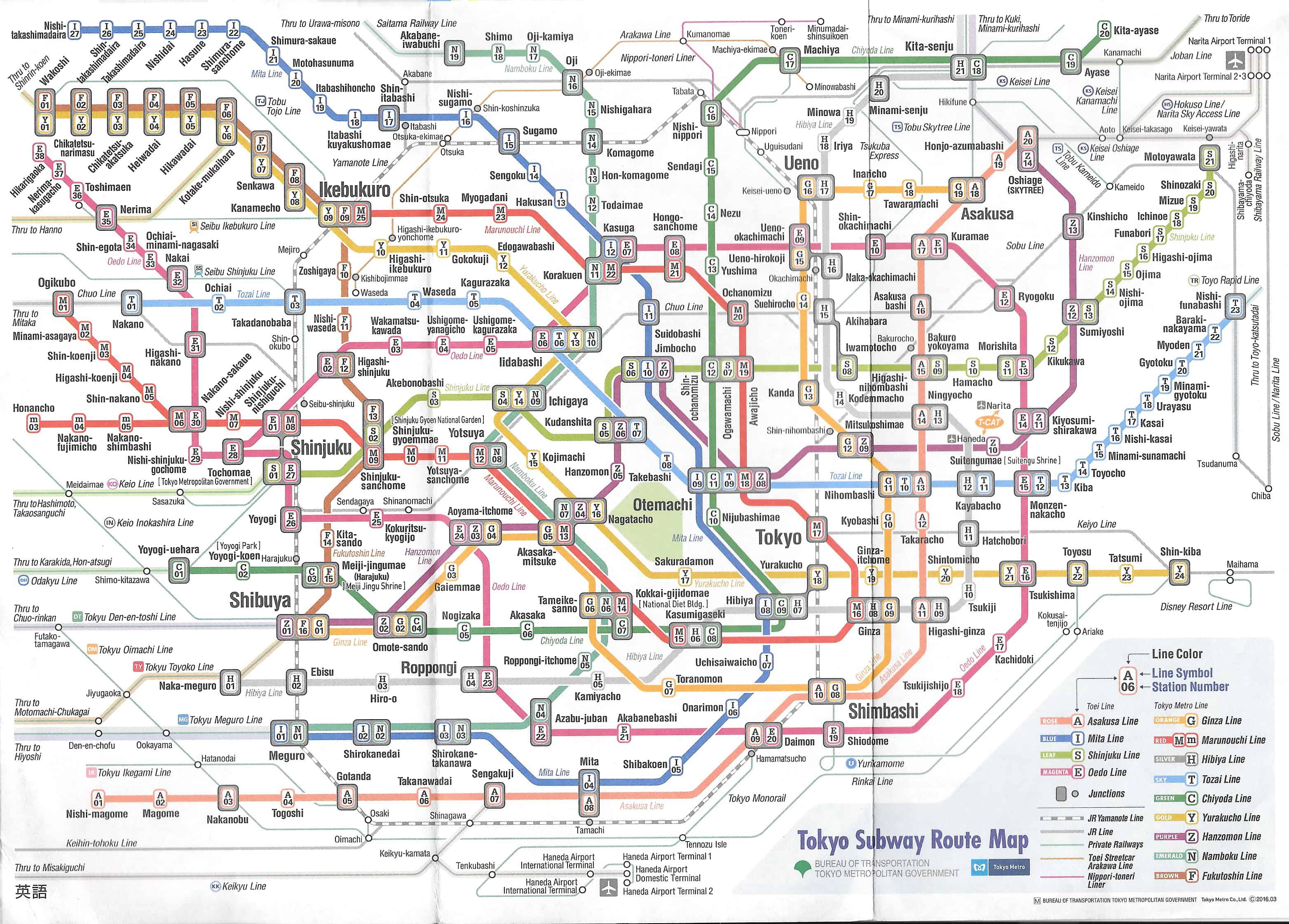 We stayed at a wonderfully located AirBnB hosted by Daisuke in a neighbourhood that we initially chose rather blindly but wound up very happily surprised by.  Though small (by Western standards) it was a large enough space to accommodate our family and provided all the essentials (small kitchen, washer, shower and even a small balcony out front). The location was perfect, embedded within a neighbourhood jammed with restaurants and cute little bars and places to shop. The fresh donuts made right next door were a big hit. 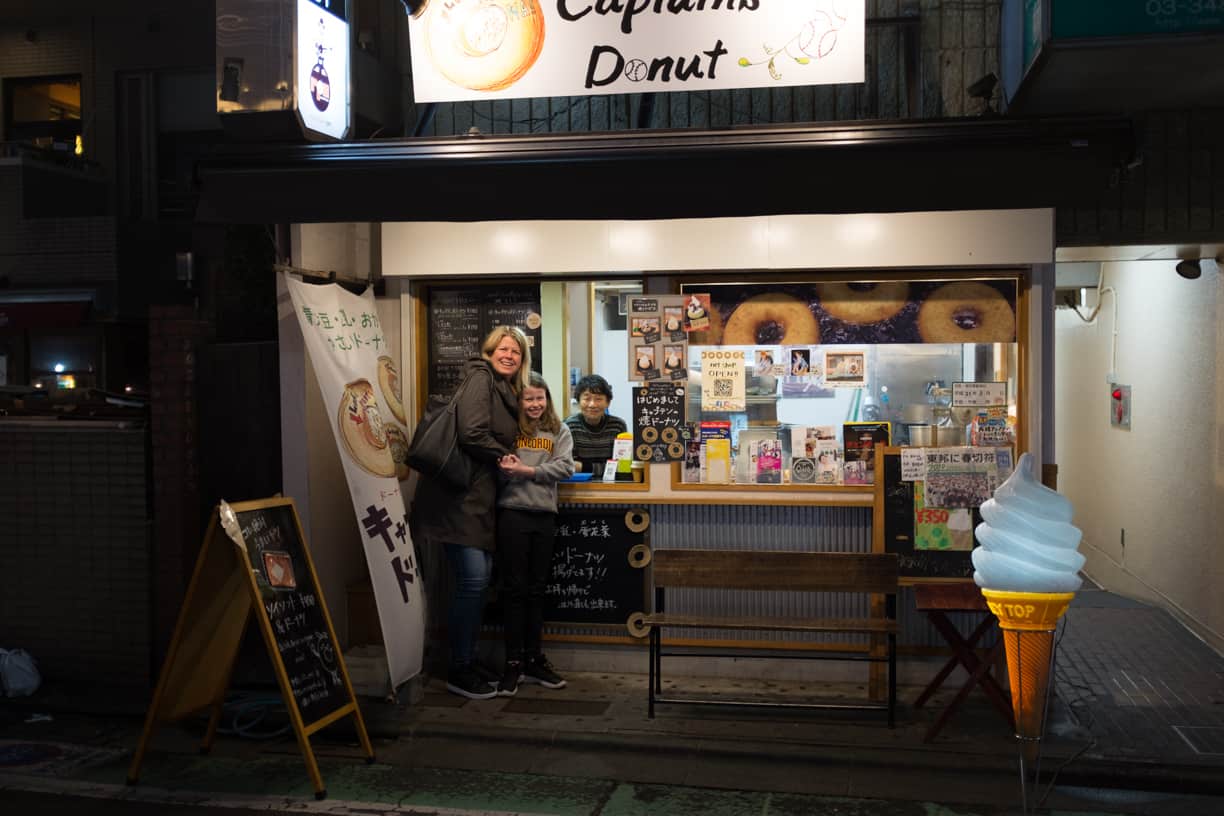 On the advice of all guide books, and because we were sufficiently jet-lagged to spring out of bed at 4:45 am, we headed to the Tsujiki Outer Market first thing on our first morning in Tokyo. It was a bright, cool, sunny day and we were starving. The original wholesale fish market has recently been moved to another part of Tokyo (so if you’re after live tuna auctions you’re out of luck) but the outer market comprising a seemingly endless range of street food options, along with a wide variety of souvenirs is easily found in the thriving market. We enjoyed some yakitori for our first Japanese breakfast, followed up but a sweet omelette on a popsicle stick (which sounds strange but was very tasty).

After the market we wander-walked first to a nearby Buddhist temple (Tsukiji Hongwanji) where we had the fortune of arriving just prior to a wedding. 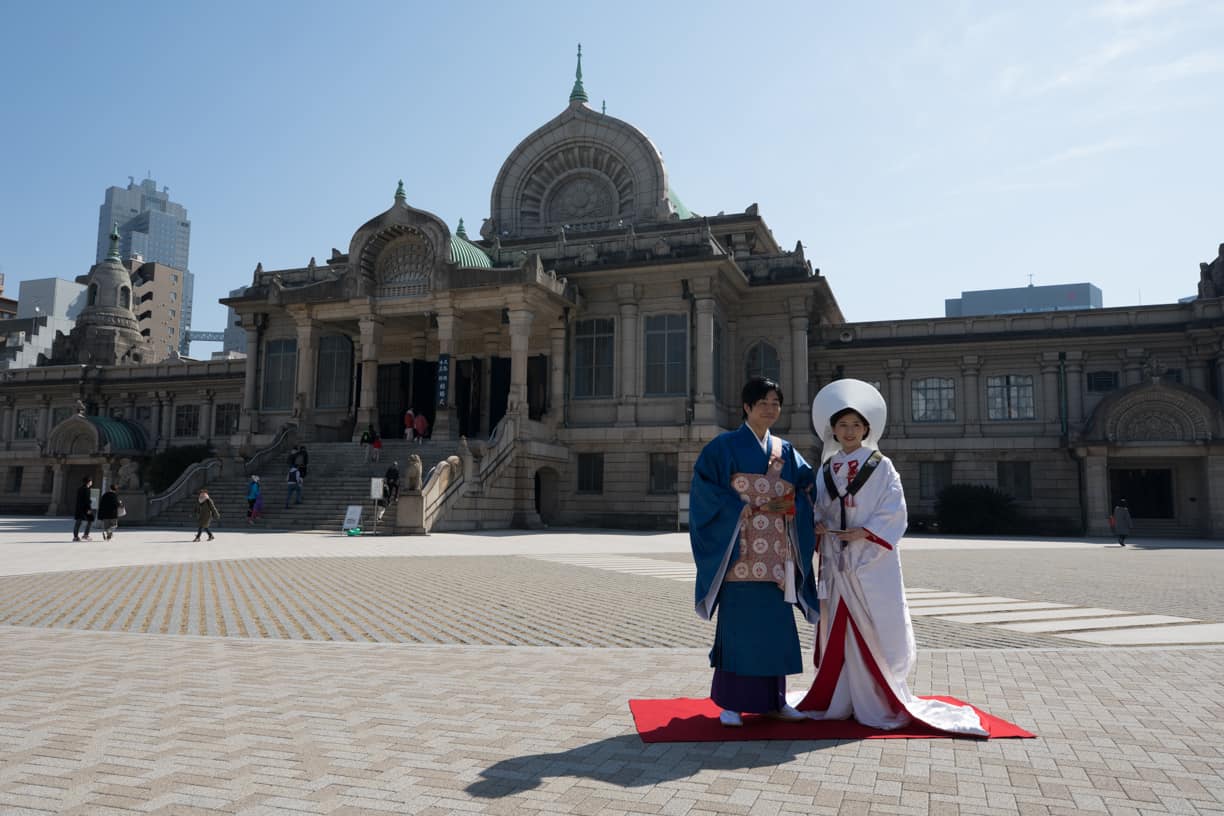 We then doubled back past the Tsukiji Outer Market to Hama-rikyū Onshi-teien, a park where we caught the early beginnings of the cherry blossoms, and the start of several photographic attempts to capture their ephemeral beauty.

You are spoiled for choice when it comes to eating in Tokyo. From a simple but excellent ramen to high end sushi restaurants, izakayas, and abundant street food vendors at markets, you will not want for choice nor good eats. Even the local 711 has decent snack food if you just want a cheapie night at your hotel after walking your feet off all day.

In the afternoon of our first day in Tokyo, we took a walk along Ometesando with a local friend, Fumi and family, who led us through one of the busiest shopping streets in Tokyo. Moments later, just across the street we entered the sublime MEIJI-JINGU Shinto gardens and shrine. 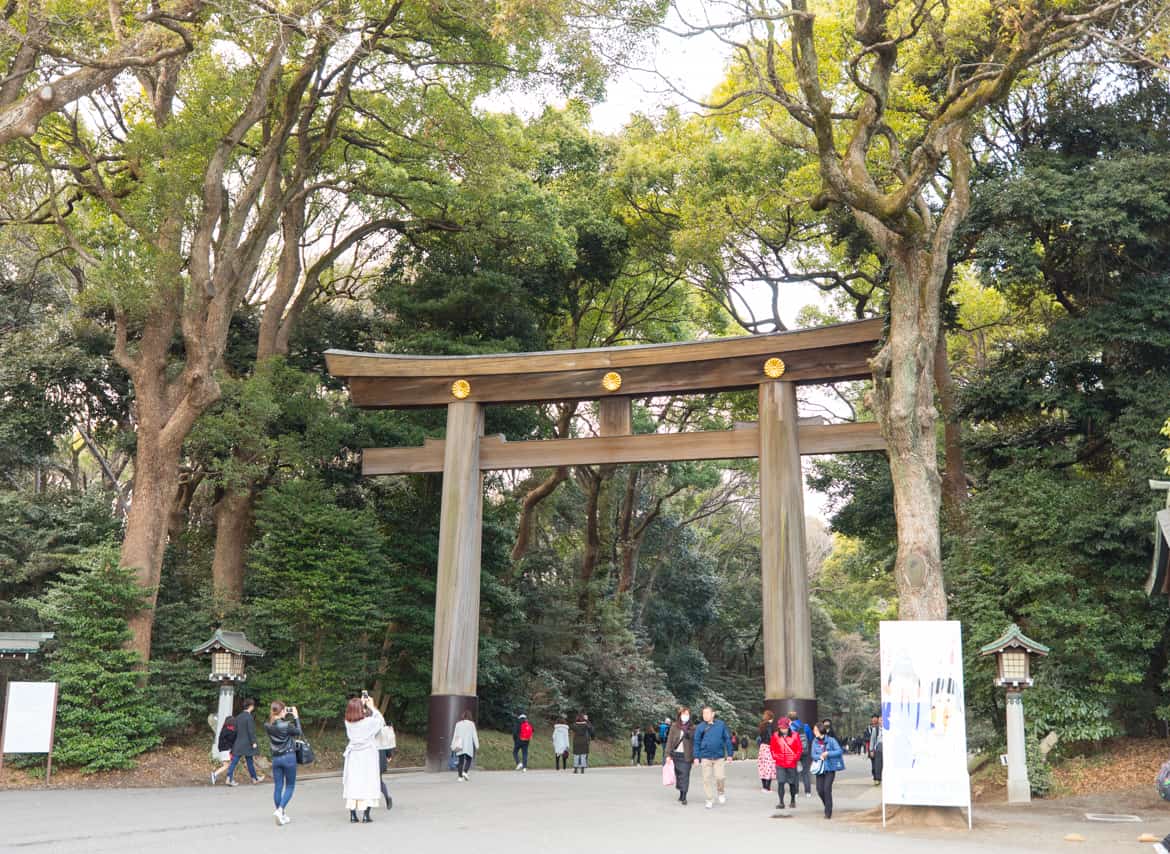 We ended the night at Afuri, a popular ramen restaurant chain where we had our first encounter with the ticket system for ordering food: upon entering the restaurant, you select from the menu items listed on a ticket dispensing machine at the front of house. You order everything – your meal, drinks, sides and extras, insert your money and the machine spits out a ticket for every item order. These tickets are then collected by the waiter or waitress who asks a few finessing questions about how thick you want your noodles and if you want the broth to be more or less spicy, and you’re done. As there is no tipping in Japan, this ends the transactional part of your meal and once you sit down you have only to wait briefly to be served, eat and leave when you are done leaving behind only a steady stream of “arigatos” that the restaurateurs will not cease returning until you almost have to bow/run out the door. 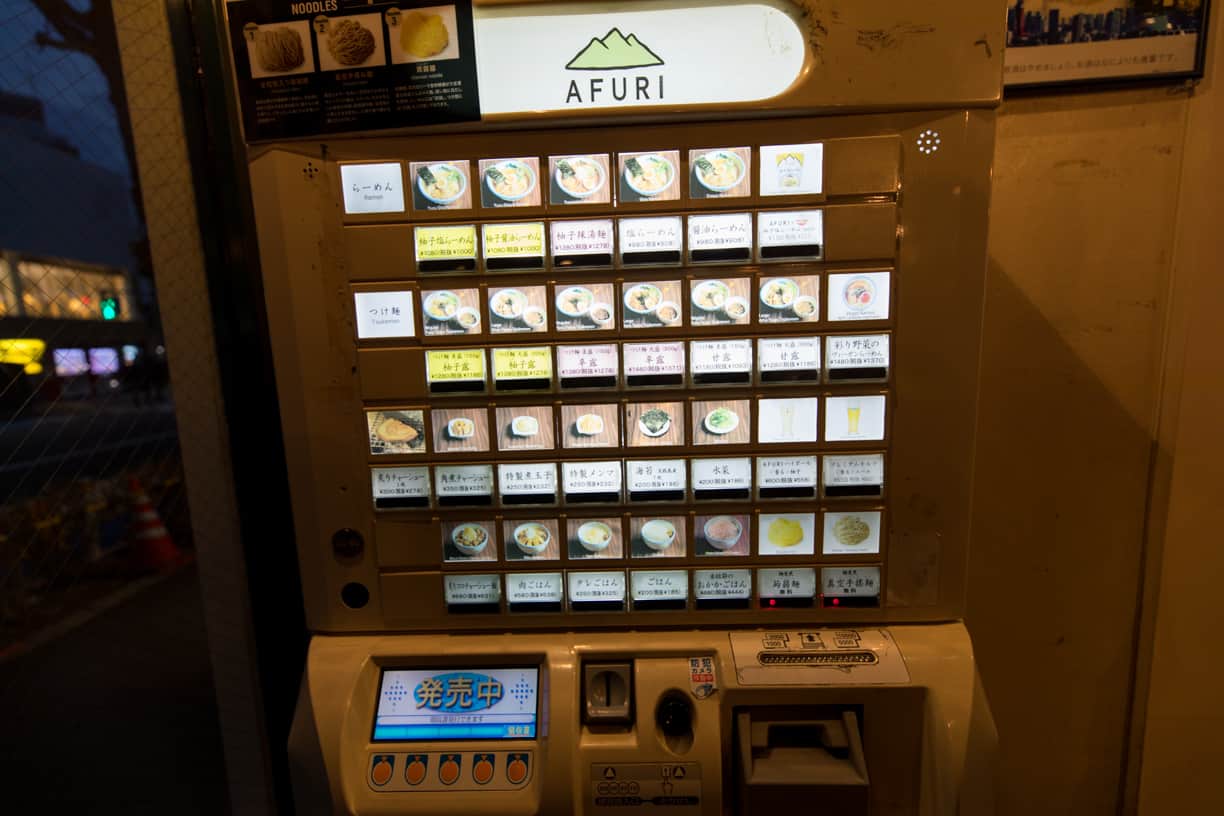 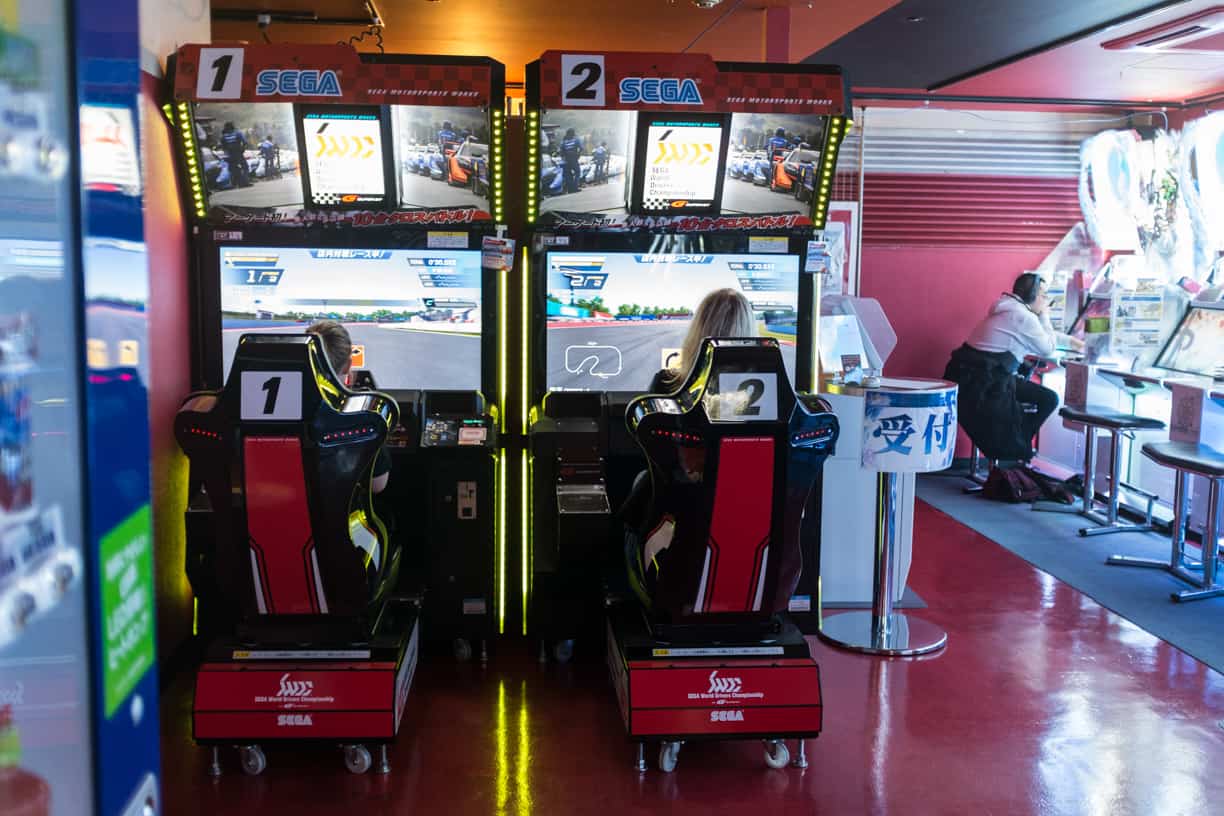 On the followed day, we let our daughter blow off some steam at Sega World where she enjoyed beating her mother at racing games, claiming the fact that she was uninhibited by not knowing how to drive gave her an advantage. (Despite the fact that smoking is still allowed indoors in Japan, the upper floor seemed relatively smoke-free and more suited to younger children.)

We experienced a few days of rain, and though it added an extra bit of hassle to the day, it provides for an opportunity to experience one of the many joyful quirks about Japan: umbrella locks. 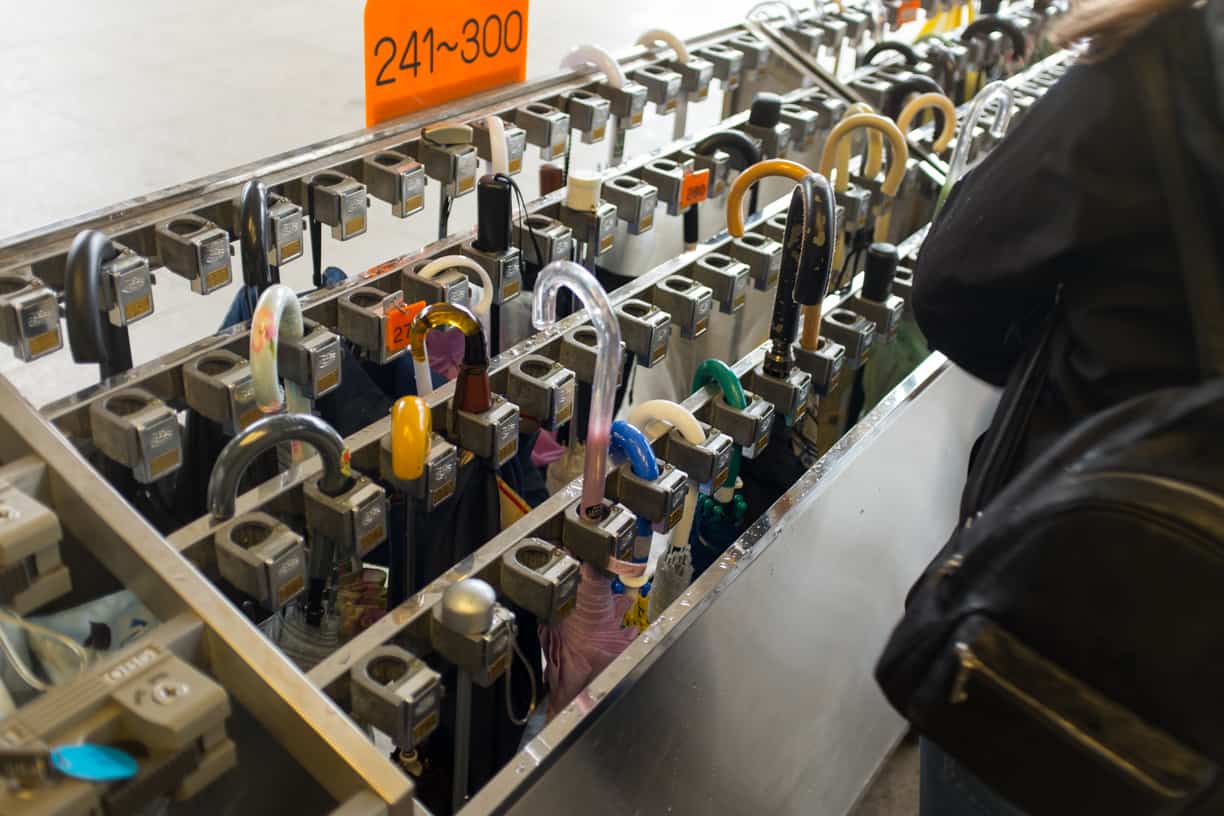 When we visited the Tokyo National Museum, after a quick stop at a cat café, we were delighted to be able to lock up our umbrella outside, retrieving it when we left. The museum had a temporary exhibit on Kimonos, as well as its permanent collection showing original ukiyo-e prints (literally paintings of the floating world, but referring in general to prints produced by artists using woodblocks and paintings of subjects such as female beauties; kabuki actors and sumo wrestlers; scenes from history and folk tales; travel scenes and landscapes; flora and fauna; and erotica) and  netsuke  (a small carved ornament, usually of ivory or wood, worn as part of Japanese traditional dress as a toggle to attach a pouch to the sash of a kimono) was all we had steam for before heading back out in search of lunch. 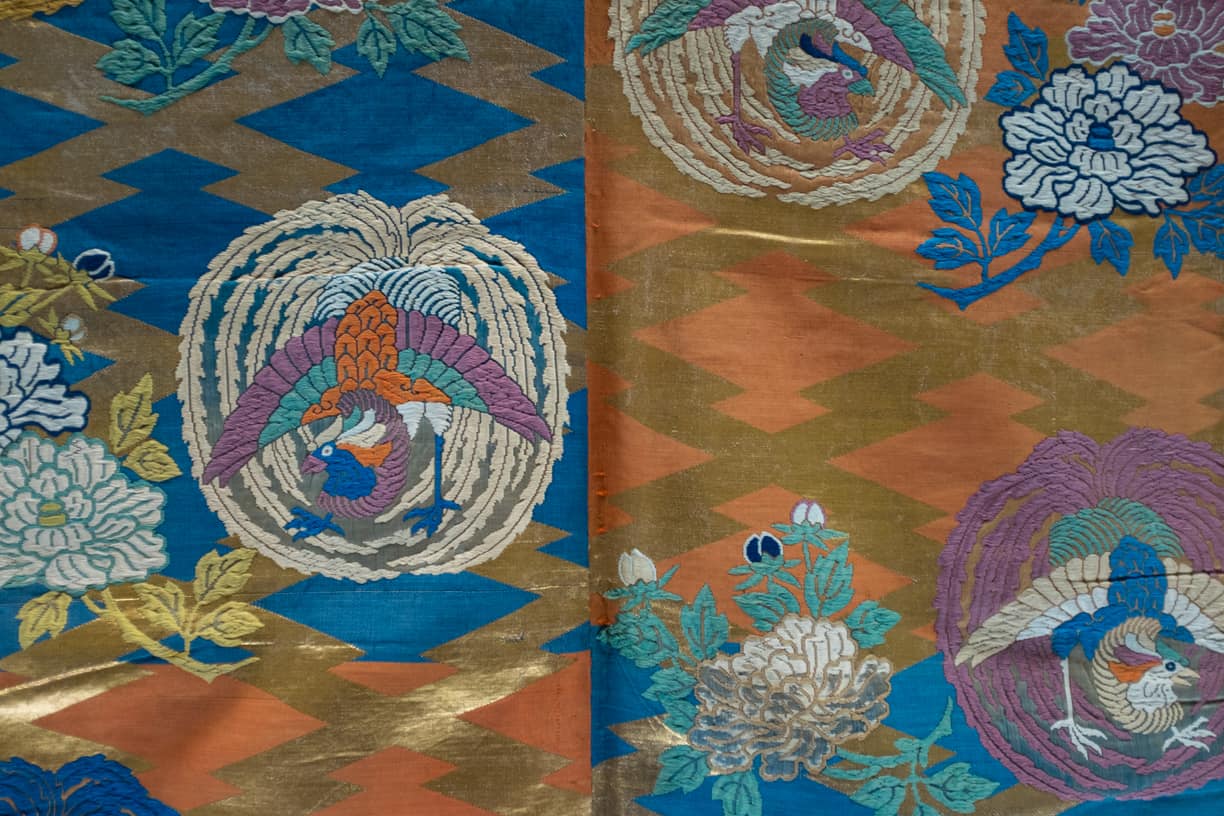 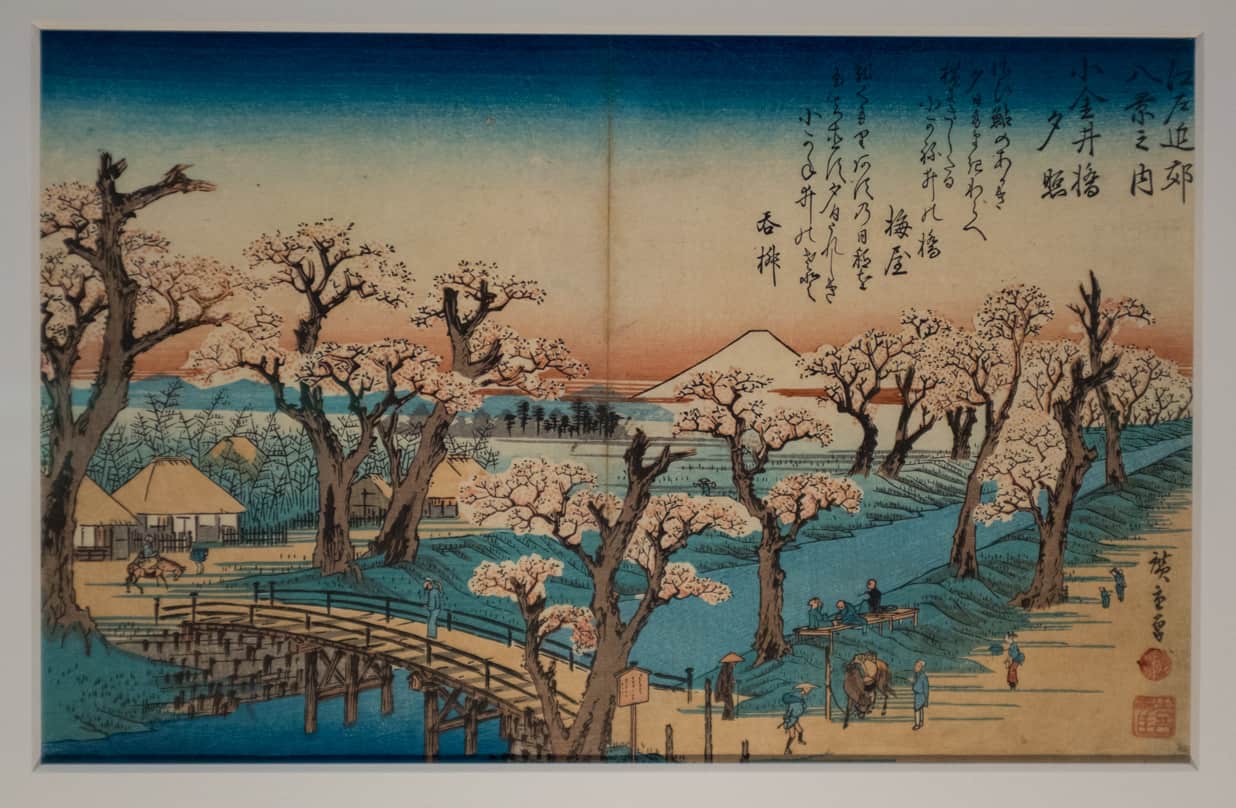 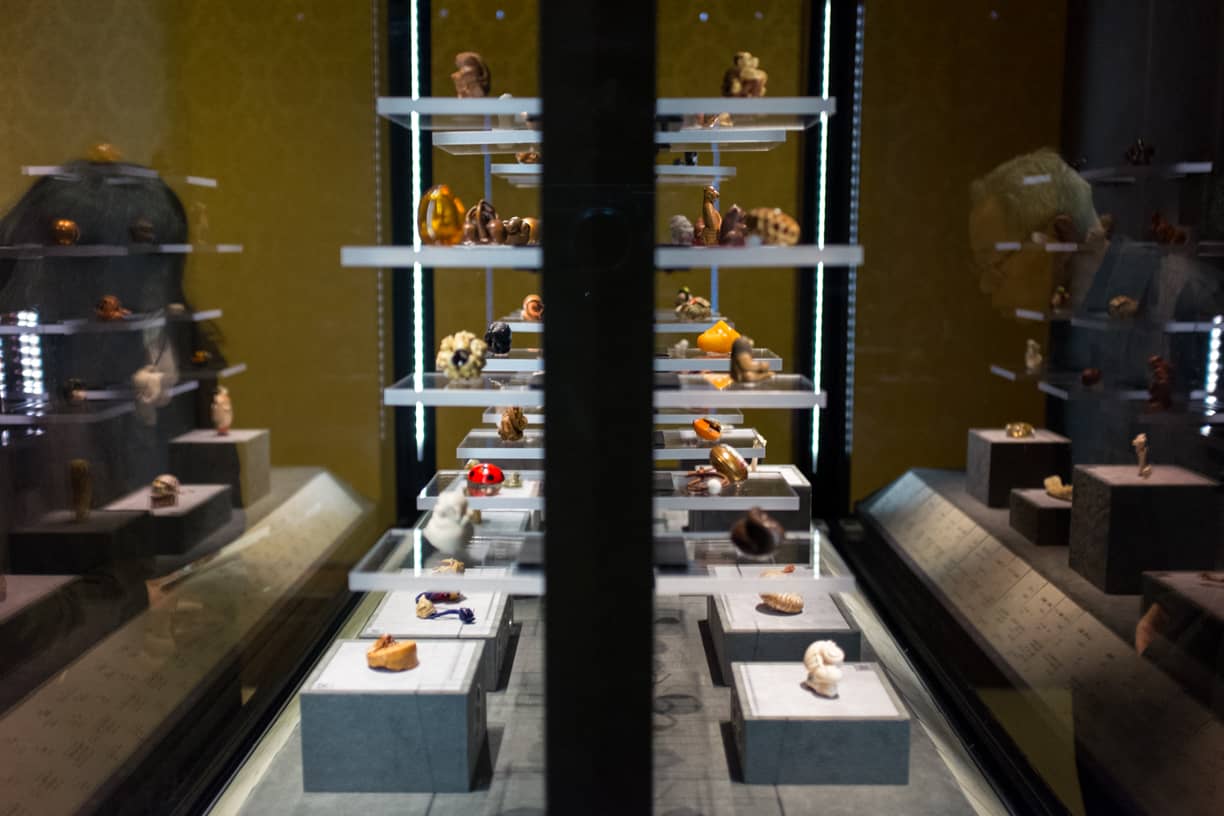 That night we ate at a local sushi place recommended by a friend and were not disappointed.  (Mikorzushi) 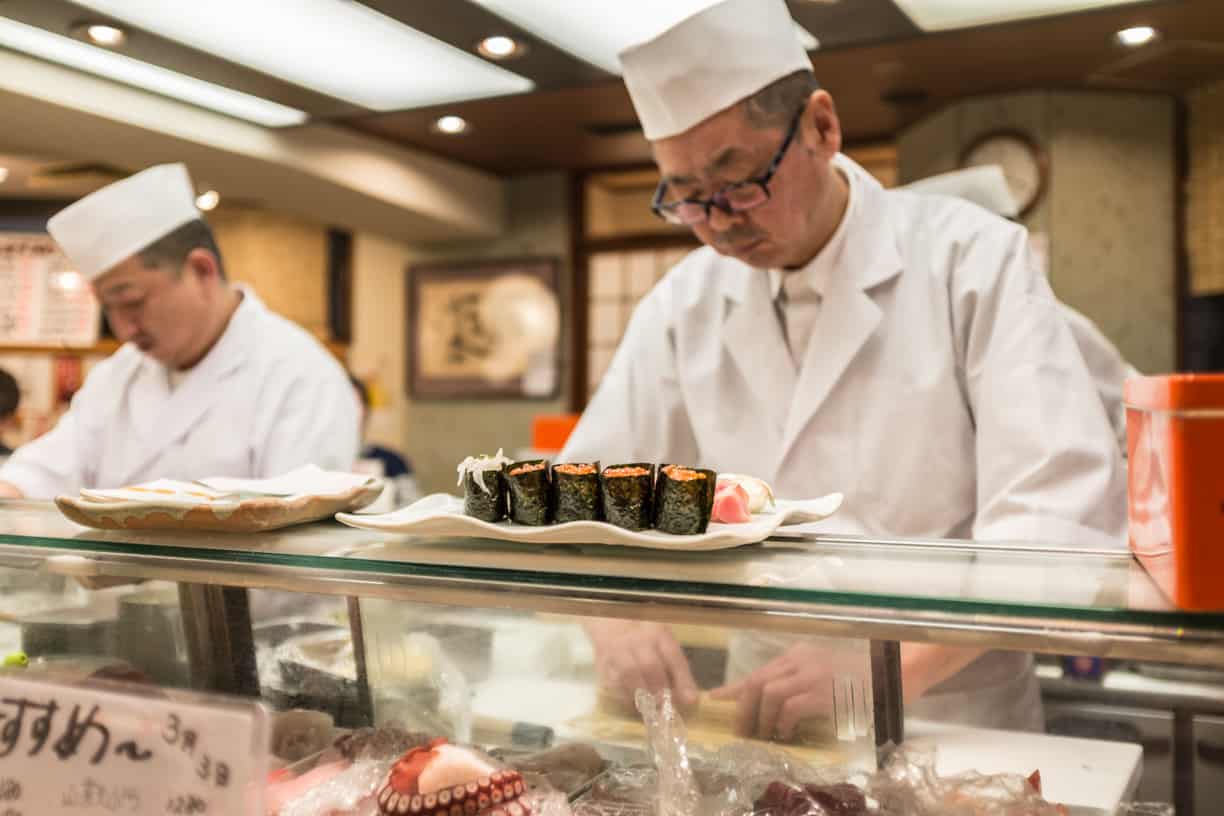 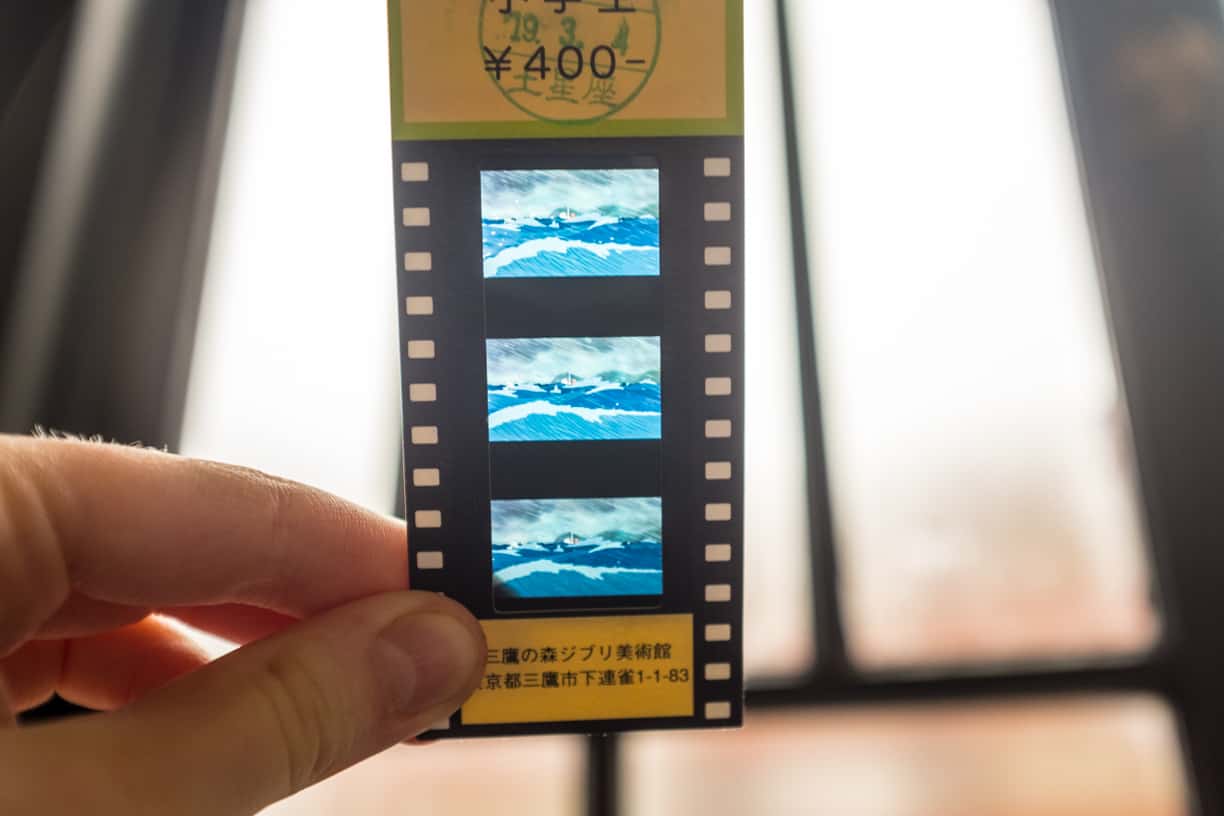 Perhaps one of our best days in Japan (and certainly in Tokyo) was the rainy museum day we visited both the Ghibli Museum and the teamLab Borderless digital art space.

Arriving at the Ghibli Museum just before it opened we were surprised to find we still had to wait in line a good fifteen minutes (and this despite having bought a ticket three months in advance), but it was well worth it. Though it’s always disappointing being told “no photos allowed”, the museum is a delightful experience appealing to young and old(er), and well worth an hour or two exploring. Had the weather been better we would have lingered to explore the rooftop terrace and nearby park, but it was cold and rainy so after a wholesome and delicious meal at the Hungry Monk (referring to Thelonious) and a few tall Asahis, we made our way to our next destination: teamLab Borderless – a digital art museum of Instagram fame that literally blew our minds. 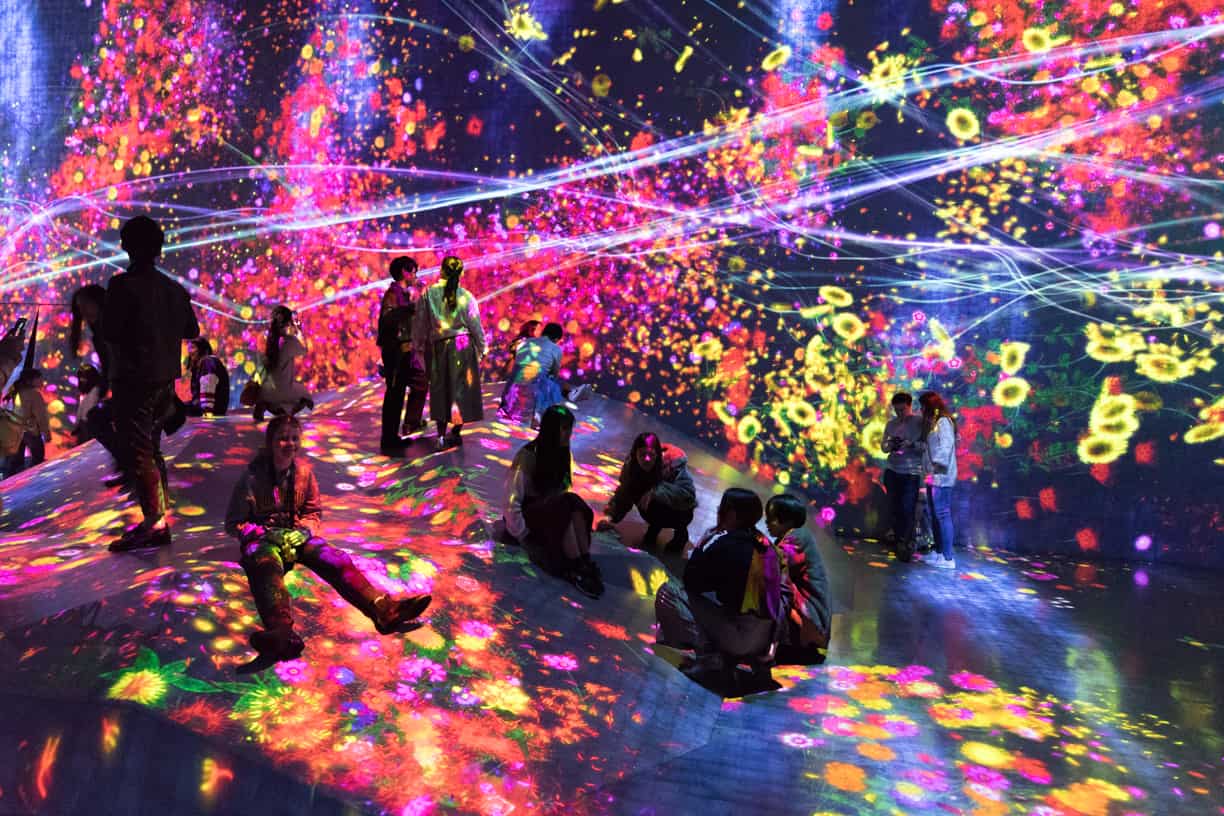 This museum is well worth the wait and advance ticket purchase is the teamLabBORDELESS and we were very lucky to snag a few last minute tickets (though still waited an hour in line outside to enter). We spent three and half hours wandering around inside, having one of our best afternoons of our trip. If you want to feel the wonder and amazement of seeing life as a child again, this is a must do.

The photos do not do the experience justice. It is a completely immersive sound and light experience that is so good you quickly forget the tedium of waiting in line for an hour prior to entry, and then wading through hordes of humans staggering around, wide eyed in wonder and amazement at all the digital delight swirling around, over, under and through your eyes. There are rooms where you can draw and colour in birds, fish or lizards and watch them come to life throughout the space as they are scanned and become part of the exhibition. Good for all ages, though watch your step inside as the floors undulate and are not always easy to navigate.