Doing good is good for your brand – Jack Hoffman’s story

I first heard about Jack Hoffman at an iMedia conference earlier this year, when Chris Carlin, Senior Marketing and Social Media Manager at the Upper Deck Company, a sports trading card company got up on stage and played this video: 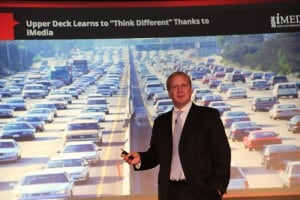 Chris is a big man with a heart as wide as his smile and a knack for cracking clever jokes, sometimes about Canadians. He is also the originator of the Jack Hoffman trading card idea, the first of a series of collectible Star Rookie trading cards featuring children struggling with paediatric brain tumours.

According to the about page on the Team Jack Foundation site, Jack was “no different than any other little boy growing up in the great state of Nebraska–he loves to play sports, ride bike, fish, hunt, and watch Cornhusker football”. No different except that he had a tumour the size of a golf ball on left temporal lobe of his brain at the age of six. When Chris Carlin heard about Jack, he felt moved as a human being first, and secondly a marketer, to do something big and powerful that would help Jack. As Chris put it, I wanted to show that we can “use brands to make the world a better place.”

So, in 2013, Chris convinced his team at Upper Deck to create a “Star Rookie” trading card for Jack Hoffman, who had recently fulfilled a childhood dream of running a touchdown in for Nebraska during their spring game. All proceeds from the sale of this card ($50,000 and counting – go buy one now!) have gone towards defraying some of Jack’s medical bills and funding the Team Jack Foundation for paediatric brain cancer research.

The Jack Hoffman card and later the Star Rookie series has not only been an incredibly positive force in the life of Jack Hoffman, for whom it was intended, but, unsurprisingly has greatly enhanced the reputation of the Upper Deck company, proving that doing good can be good for the brand. While never the intention, the positive associations are well-deserved and unavoidable.

These same positive associations help bring Chris Carling into contact with Denis Murphy, father of Jaclyn Murphy, leading to the development of a new “Heroic Inspirations” trading card for Jaclyn Murphy who is the founder of the Friends of Jaclyn charity and herself the survivor of childhood brain cancer.

Learn more about the Friends of Jaclyn foundation here.