A picture is worth 4000+ Friends of Jaclyn 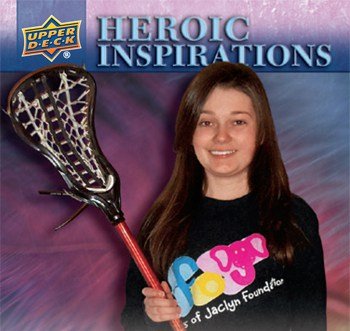 As a photographer, I often wonder if what I do really matters. I know it can’t in the way, for example, a researcher’s work does tracking down the cure to cancer, or an engineer does figuring out how to make clean energy. All I do is take pictures, I’ve often thought to myself. But after hearing Denis Murphy tell his daughter’s story, I realized that a photograph can save lives too.

Jacyln survived and thrived, beating her cancer so far and the inspirational story of how she did – with the loving support of her father, her family and the Northwestern Women’s Lacrosse team behind her is worth retelling, especially because a photograph plays an integral part in the story.

Denis Murphy is the proud father of Jaclyn Murphy, paediatric brain cancer survivor and founder of the Friends of Jaclyn foundation. Having a young daughter of my own, the thought of something as cruel and unfair as paediatric brain cancer is enough to make your heart break. Meeting someone whose own daughter has suffered through this horrible affliction and not only survived, but triumphed, is truly awe-inspiring and helps focus the mind on what really matters in life.

Take a second to watch this video originally aired on HBO to learn more about Jaclyn’s battles and the story behind the Friends of Jaclyn:


The Friends of Jaclyn (FOJ) program was inspired by a photograph of a lacrosse player that Jaclyn and her father would pass by in the hallway of the 9th floor of Memorial Hospital (“the saddest place in the world”) where Jaclyn was receiving treatment for her medulloblastoma, a highly malignant brain tumour. Jaclyn loved sports and missed the support of being a part of a team while she was enduring her treatments. As her father puts it so poignantly, “when you have cancer as a kid, you lose your friends, you lose your life. Who wants to sit around on the couch with an ailing child. It’s devastating. Every day we passed by that photo we would look at it together and it would takes us to another world, a place away from the pain. I told Jaclyn one day she would be there.” 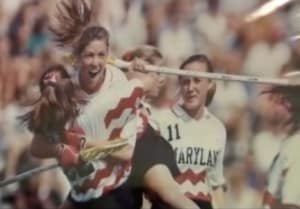 Inspired by the photo, Jaclyn reached out to her former Lacrosse coach who connected her to Kelly Amante, the coach of Northwestern’s Womens Lacrosse team, the Wildcats. That marked the beginning of an incredible journey for both Jaclyn and the team who adopted her.

As Denis puts it, “There is no chemotherapy, radiation treatment or clinical trial drug more powerful than the love, support and friendship a team can provide to a sick child” The Wildcats truly made a difference in Jaclyn’s life. When they called, or texted, or sent videos of support it lifted Jaclyn. “No more pain, no more pain.”

Jaclyn blossomed under the love and support of her adopted team and soon realized that she wanted to share this gift with other children suffering from childhood cancers like she had, starting with her hospital roommate. “Dad, we have to get her a team.” 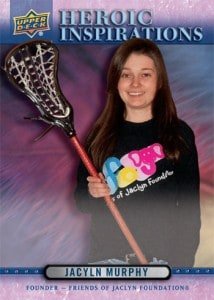 And so the Friends of Jaclyn foundation was born. From this single story, there are now 4000 and counting more stories of children’s lives transformed by the support of thousands of sports teams across North America who have lined up to make honorary team members of sick kids and inspiring the Upper Deck Company’s “Heroic Inspirations” trading card for Jaclyn Murphy.

I felt lucky and grateful to have the opportunity to hear Denis tell this story first hand. I watched him walk onstage in front of an audience of talented, smart marketing professionals working on the bleeding edge of their rapidly changing industry, and felt I was in the presence of someone who wasn’t just try to move more product and gather more likes for his Facebook page (though you should go Like it). When he finished his story and told us how important it was “to live in the moment, play in the moment.” I knew he meant it. And he made us all feel it too, by reminding us how lucky we were to be where we are – alive, healthy, here in this moment right now. 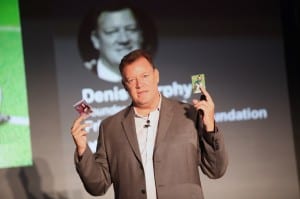 So I went home and the first thing I did was become an Angel on Friends of Jaclyn’s foundation. It’s as easy as adding your email address to an email list. Once you do, you get notifications about children facing something really hard – an MRI scan, a big operation, a particularly tough bout of chemotherapy – and you realize that every moment truly does count and if you can do a little bit to make someone else’s moment a little lighter, that’s something worth doing.

For more information about Friends of Jaclyn, please visit www.friendsofjaclyn.org.